In the project jointly carried out with RAI, the SARAI high-performance engine developed by Reveal demonstrated the possibility of supporting large-scale automatic acquisition of huge data volumes in real-time, about complex and market critical phenomena: opinions, interests, tastes and trends on journalistic and entertainment television contents.

In SARAI Reveal has designed, developed and experimented with a Sentiment Analysis workflow for the management of streams of Twitter micro-posts in real-time (approx. 200 tweets per second).

SARAI, the service created by Reveal, and integrated by Reply Target for RAI Radiotelevisione Italiana, deals with language processing of individual tweets, the recognition of underlying TV transmissions of interest and the corresponding sentiments expressed by users. The metadata created are made available within traditional Business Intelligence environments (such as MS Power BI) and trigger multidimensional analysis for the RAI’s Twitter monitoring Department. SARAI is integrated and operational in the Microsoft Azure cloud environment.

Strictly based on a Data-driven Algorithmic

The Sentiment Analysis process of the system is strictly based on a data-driven algorithmic paradigm and proceeds through the application of supervised classification methods: the system, therefore, provides a set of target sentiment classes and applies the suitable class to individual input tweets. The sentiment classification criteria strongly depend on linguistic knowledge along with lexical, grammatical and semantic dimensions

Positive – The message expresses a feeling in favor (therefore Positive) regarding the theme or aspect to which it refers.

Just finished #NormalPeople and I’m so overwhelmed with emotion. What an amazing piece of television. Quite frankly the most powerful, beautifully real, gut wrenching drama I’ve ever seen. @DaisyEdgarJones and @mescal_paul you are both extraordinary. Wow. Just.. wow

Negative – The message expresses a contrary feeling (therefore Negative) regarding the theme or aspect to which it refers.

FIRE@chucktodd This guy is the worst infomercial host on television. #ChuckTodd is a hack and needs to be sent packing @realDonaldTrump #DrainTheSwamp Spreading Hate & Fake news in National Television is not a Free Speech

Years may go. But not his style. #Master

Contrasting – The message expresses both a Positive and a Negative sentiment regarding the theme to which it refers.

The coronavirus pandemic may have cleared skies and halted cities, but it isn’t slowing global warming

Neutral – The message does not express any feeling, nor subjectivity

This is #TheVoice Watch Mondays & Tuesdays 8/7c on @NBC ! Catch up on the NBC app.

Emotional metadata and much more

The SentiRe platform orchestrates content analysis, data and metadata management services, and search over document streams flowing within a social network. In addition to emotional metadata, SentiRe allows the processing of tweets in the topic recognition dimension, also allowing to detect and manage users and communities.

The image below shows on the right the activation status in the territories (user engagement map) of the community selected on the left that is generated in SentiRe in real-time.

Below are the heatmaps of distributions of positive (green) sentiment in the territories (reference transmission: “Che Tempo Che Fa”).

Creation of an elastic platform, able to easily manage large volumes of data and easily integrated with listening channels. 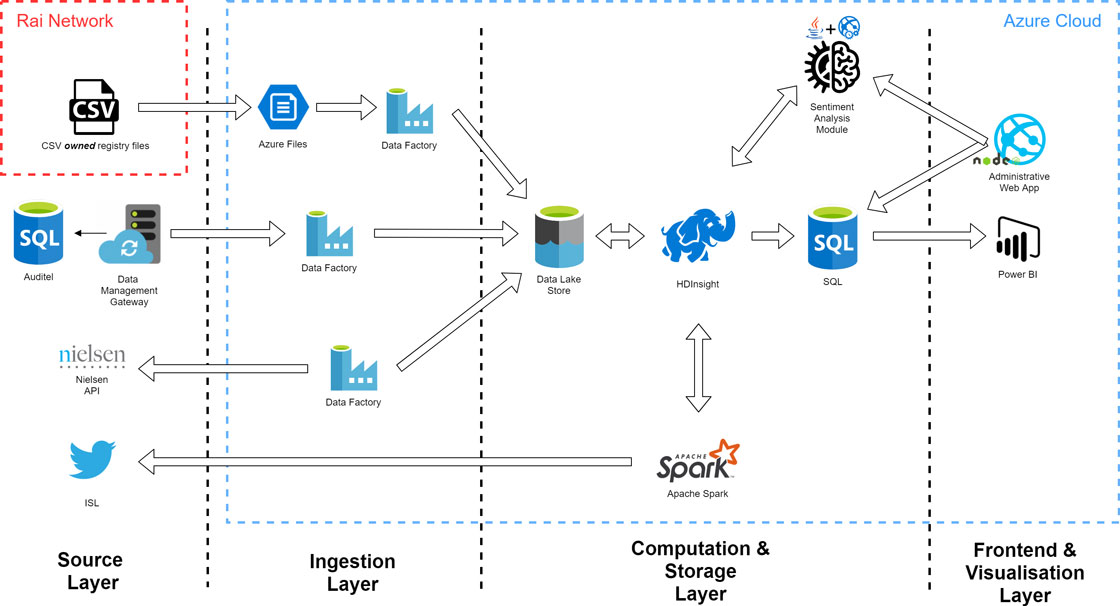